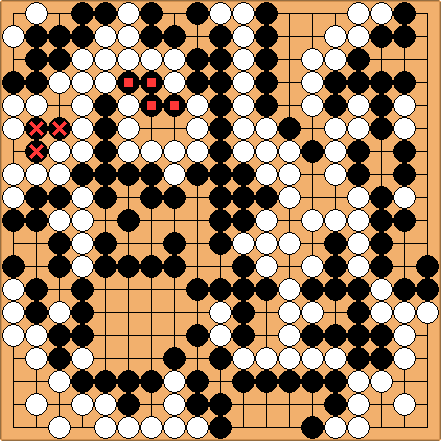 This is an interesting game recently played on KGS by two kyu players. The upper-left corner is a bend-four, which by definition in Japanese rule is dead. However, there is a seki around *bs*, which means if they were to play on (under a different rule set), white would not be able to kill the corner without losing the group forming the seki. The position on the board was that white would win if the corner is ruled to be dead. And black would win if they were to play on. Making things even more interesting (but technically not relevant to the argument) is a second seki around *bx*.

I am no rule expert so I cannot comment any more than what I've done.

It always play out the practical way to the very end.
So that there is no confusion.

The study of go rules...

The study of go rules is quite complex and must always be declared in full at the beginning of any game (or tournament). As a former tournament director we have used an amalgamation of rules in our tournaments. Such rules include, ING rules, Chinese rules and even a New Zealand rule set.

You are correct in saying that the game can be won or lost depending on the rule set. Japanese rules calls for points and no points for any eyes included in a seki. There is also a rule set for many countries that includes the possibility of suicide to help augment this issue.

The fact that a go server adopts a specific rule set makes it easier to resolve the situation, as it has been agreed to and defined by both parties. As a tournament director you have to take each on a case by case basis.

In this situation, black would not necessarily win if the game was to go on. As the top left will lead to a snap back if white plays first, if black is forced to fill that section first, it may lead to white winning in all instances. Since a snap back can be played every other move, under the ruleset where the board may no revert after x-moves to prevent a 1000 year ko, it is possible that this is whites game under most rules. Since Japanese rules declare that all eyes in seki have no value, this is black game under that one rule set.