Moves of the third kind

We all know two kinds of moves: sente and gote. Sente moves often have a small direct gain, but certainly have a threat worth quite some points. That is why we feel obliged to answer these moves, to handle the threat. Gote moves may have a big direct gain, but there is hardly any threat worth thinking about at the moment the move is played. 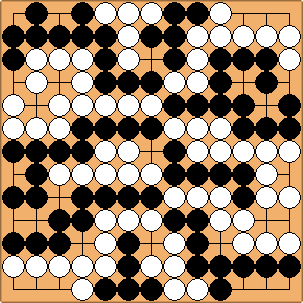 I have constructed the position shown with a few third kind moves, where the values of both gains and threats are totally clear. It looks like a late endgame, but you could treat this position as a model of the middle game, where a few alternatives have to be thought through. The sequences of moves are quite short, yet it is not at all easy to find out which is the best sequence when Black starts or when White starts. You might give this position a try, and in the meantime think about those strange moves of the third kind.

Determining the best order of moves is quite difficult, you need to analyze all variations, working backwards, selecting the White move that gives the best result for White, and then selecting the previous Black move that gives the best result for Black, and so on. There seems to be no reliable shortcut by looking at the size of the direct gain and the size of the threat, putting them together in some formula. While playing a game this is all the more difficult because the size of the direct gain and the threat are not that clear, and moves in the opening and middle game influence each other. Humans have to rely on best practices, proverbs, experience. Computers like AlphaGo have a huge advantage here, they can approximate the right choice by playing through lots of variations and choosing the move with the highest chance of winning. 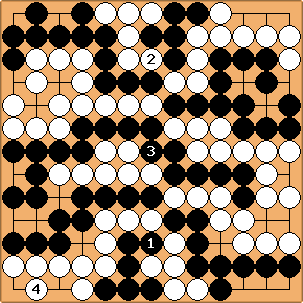 Black's first move in diagram 1 combines a gain and a threat. White ignores this move, playing the other move that has a follow-up. What remains then, are three gote moves, to be played in the right order. Black wins with 15 points.

Diagram 2 shows what happens if White answers Black's so-called sente moves docilely: the result is very much better for Black, he wins with 36 points. One should notice that the white moves, while being big, have no follow-up. 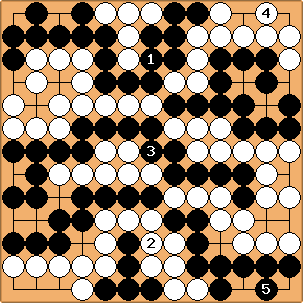 In diagram 3 Black starts with the other sente-like move. The best continuation makes Black win with 14 points, only slightly less than the best result of diagram 1. White again ignores Black's first move as in diagram 1.

With only slightly different values for the gains and threats concerned the result could have favoured the variation of diagram 3. This makes you wonder about the validity of the rule that a double sente move should be played before the sente move. 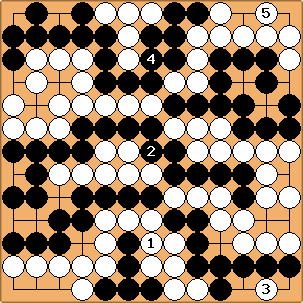 The best variation when White starts is shown in diagram 4. White's first move is the only one with a follow-up. Black's best response happens to be the big gote move, maybe a bit surprising. White wins with 9 points. 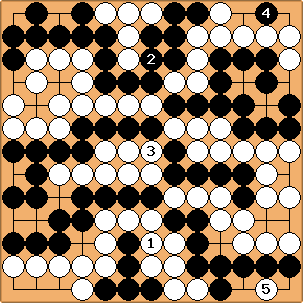 In diagram 5 Black answers at the top, the only move with a follow-up. But the best Black can do is slightly worse than diagram 4, White wins with 11 points.

In diagram 6 White starts with a move without follow-up, Black then grabs the only big move with the follow-up. The result is very bad for White, compared with diagram 4: Black wins with 13 points.

The value of the gains and threats in the position shown were fairly big to be able to explain the issues, still the point difference in the results sometimes is surprisingly big. The different situations are the Black or the White start, and a good or a bad move. Because of this sizeable point difference it pays to look for some lessons learned.

As the position shown indicates one could say:

Professional players, and AlphaGo, give quite a good example on how to handle moves of the third kind. My guess is that it pays to study their games, with these questions in mind:

I hope you liked this little exposé.

Since all the moves are "gote-ish", we just always take the largest one.

So to sum up, there is no sente anywhere in this problem, just a bunch of gotes whose precise values are easy to compute. And once the computation is done, both players can just always take the largest remaining one, which is what you do when there are only gotes left.

Thank you very much for your feedback: very interesting, and it is nice to have someone react to an article. However, there are some comments I would like to make about it.

Sente: this probably is a matter of definition. To me, a move is sente when it has to be answered locally, directly related to the sente move, to get the best result. Because of this, to me the threat of the sente move doesn't necessarily have to be bigger than the direct gain, although it most of the time will be. Like, if there are two moves left, the one with direct gain 7 and threat 6, the other with direct gain 2 and threat 3, the first move is sente to me, the second one not.

The idea of this article was to explore what happens if both the direct gain and the threat of a move are quite significant, of comparable size. It became clear that answering the threat of these moves, treating them as sente, is very disadvantageous, as shown in diagram 2 in the article. Because of the disastrous result of that diagram 2, I guess that the same conclusion can be drawn even if the threat is mildly bigger than the direct gain of a move. I suspect that many amateur players don't know this, and will treat these moves as sente. When replaying professional games, they might wonder why these professionals tenuki so often, and this will be all the more the case when replaying the AlphaGo - AlphaGo games. So yes, these moves are gote as they are not sente by my definition: the problem one has to face in a real game, is to find a proper tenuki move when the opponent played such a third kind move, where the position in this article just gives you a few clear alternatives to choose from.

The method of calculation you used may come in handy as a shortcut, and it gives the right result for the position in the article. But I think it is incorrect, as sometimes it doesn't support the choice of the best move. The problem is that the method uses averages to calculate the temperature of a move. But the value of the move actually played, the gain accomplished, and foremost the threat materialized or countered, is not a result based on an average, there is a distinct choice between alternatives. The problem of the method occurs sometimes when the one move has a bigger direct gain and a smaller threat than the other move. To illustrate this, I modified the position, see below: the method suggests Black to start at the bottom, where a start at the top is better for Black. 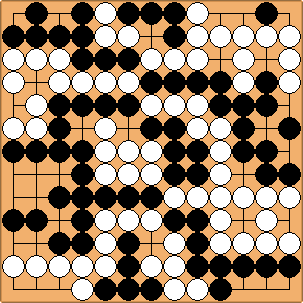 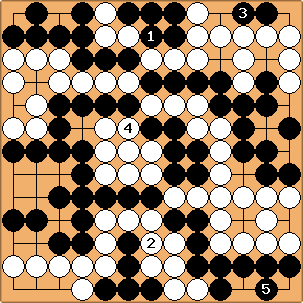 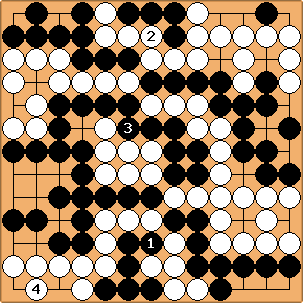 I now explain my method of ranking moves, that comes close to yours. As said before, I think this method is incorrect.

For a side (Black, White) I count the direct gain of a move. Of the subsequent threat I count the gain for the one side if the threat materializes, and I count the gain for the other side if the threat is countered. I add these two values and devide the sum by two, as one doesn't really know who will play the follow-up move. This result is added to the direct gain of the move, to give some value of the move.

So, according to this method, the bottom scores higher than the top, but when playing the moves, starting at the top is better for Black.

I see no point in taking the part of White into consideration, as it is about what Black can accomplish. But if done, here the value for White at the bottom is higher than at the top too, adding to the misconception that it would be better for Black to start at the bottom.

To conclude, nothing beats comparing the results of sequences of moves, looking at all the gains per move, per player. This is terribly difficult to do for us humans, and quite more fitting for computers. That is one of the reasons why humans will never win again against the likes of AlphaGo.

Isn't it just what you would call reverse sente ?

And when you say you see no point taking White's part into consideration, well, each player move in turn, so you have to...

Which book did you use to become strong like that ?

I actually am not that strong a player, once was 1 kyu. But I put my mind to the problem, constructed positions that cannot be misjudged, and took on the horrifying task to work out the results of every variation, and "minimax" them. And then, I had to write an article about the subject, make sure the diagrams were right. I still feel proud about the result, all the more because I like the message it contains.