Practical life and death problem from the Ing Cup final

All serious Go players practice life & death problems. The question is: should we study textbooks or real games. I personally prefer the latter as real games often contain additional factors that influence our decisions on local life & death situations.

This is the standard solution in many textbooks. The result is a ko (note that black takes the ko first).

is the key point for both sides. After *b7*, because white needs to connect at 'a' eventually, the corner is a T4 dead shape.

is also a tesuji, creating a different ko after *b5*. This, however is consider a failure (or at least an inferior solution) in several textbooks for two reasons: (1) white takes the ko first; (2) black would lose more points on the top side if white wins this ko. These of course make a lot of sense. But in real games, because of other factors, this variation might be the better choice. 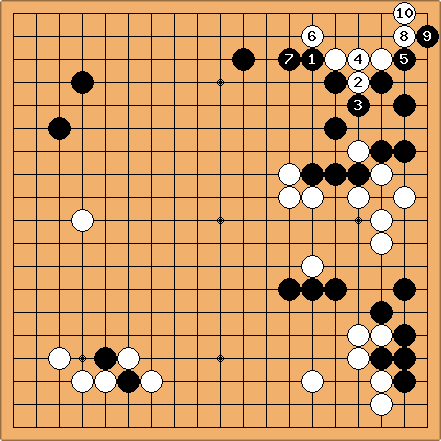 White had two probes in the corner before deciding what to do outside. It's not possible for black to kill them.

form exactly the same shape as discussed above. A ko fight started about 50 moves later and amazingly Fan Tingyu chose the 'incorrect' way to start the ko!

Because this is a major tournament final, there were multiple live commentaries on the internet. Hong Seongji 8-dan of Korea commented: "I think B101 is a mistake. Black would suffer a loss locally". But is that really the case? In a separate live commentary, Li Ang 3-dan of China explained: "B101 chose this ko fight to prevent white from using the local threats". 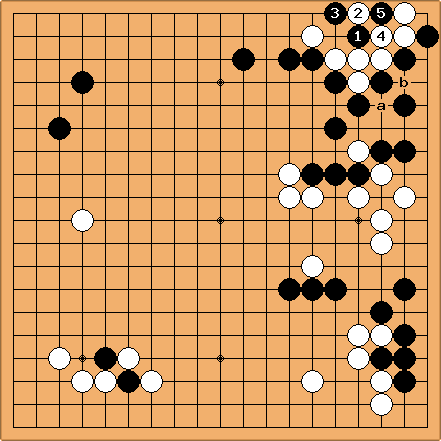 a and b are local ko threats for white

As can be seen, if black chooses the textbook solution, white can make use of the local threats at 'a' and 'b'.