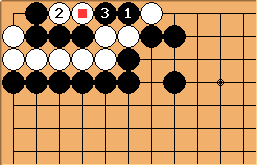 This is the basic shape of eternal life, used in both Japanese and Chinese official rules to describe the situation. To reply to

attack, white cannot simply capture the stone at *b3*. Otherwise black would play

to form a Bulky Five shape to kill.

is a brilliant move. After

recapture, the board returns to its original position.

Such patterns are quite well-known because the traditional tsumego books Xuanxuan Qijing(玄玄棋经), Gokyo Shumyo(棋经众妙) and Igo Hatsuyoron(围棋发阳论) all contain problems resulting in eternal life. Following is the problem No. 124 of Igo Hatsuyoron: 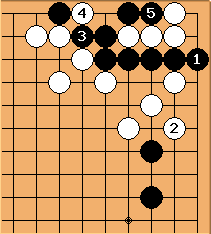 is a sente move.

creates the basic shape for eternal life. Actually the situation outside the corner is more interesting. 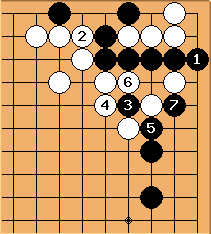 is a tesuji. If white plays *w4*, black can easily connect from the side with tesuji *b7*. 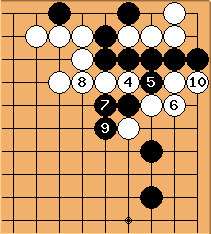 appears to be a good move - to avoid a ladder at the same time prevent white from running out. However, black's plan is flawed because white can play

directly to win the capturing race in the corner. 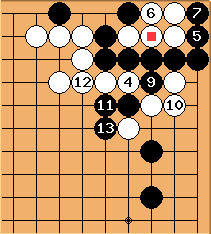 To rectify the situation, black

and following is a better sequence, forcing white to create the Bulky Five in the corner, extending liberties first, before returning to

to win the race on the side. 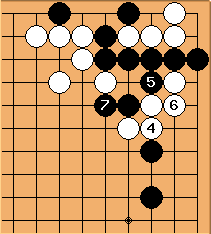 Black can run out

is another possibility. But

can run out and it is impossible for white to enclose the group. Again black can use the Bulky Five in the corner to gain more liberties should a capturing race occurs.

The tsumego problems contain mostly man-made shapes that cannot be easily materialised. For this reason, Eternal Life is extremely rare in professional games. To my knowledge there are only three examples:

This rather peaceful game was heading to small yose stage when a ko fight suddenly erupted. Out of nowhere, white miraculously created the Eternal Life shape while playing ko threats in a black corner. This shape is the exactly the basic Eternal Life shape.

The game was very peaceful and even a bit boring. When white played W246, the game was extremely close and was to be decided by the outcome of the last half-point ko. White played very accurately - W248, W250 and W252 were all to remove black's ko threats before actually starting the ko at W254. Both sides had many ko threats so the ko lasted all the way to move B317. 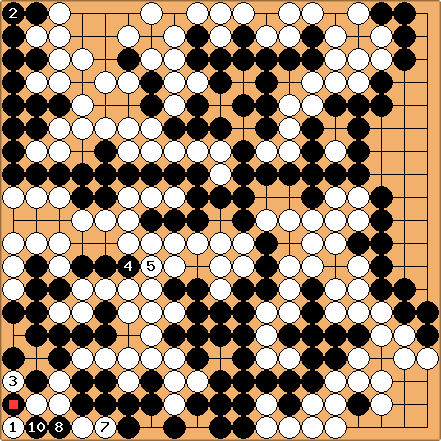 At this moment black must connect the half-point ko at

- he has one more ko threat (*b4*) but so does white (*w7*), so black would lose the game by 0.5 points if not playing *b2*. They started fighting a different ko. Amazingly both sides can use local threats (*w6* and *b10*) that results in the board position repeated every 6 moves. This is by definition an Eternal Life. 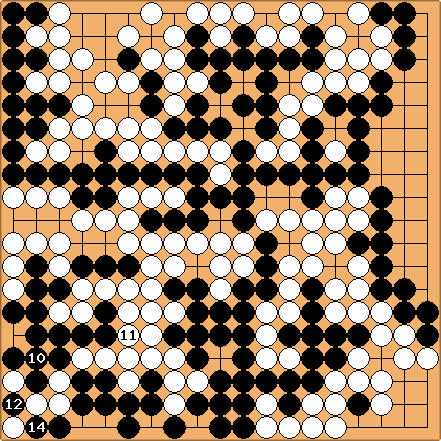 Instead of sticking to the eternal life, black has the option to connect at *b10*, still winning the ko fight. But black would have to fill both

and *b14*. In Japanese rule that would result in black losing one point so he would still lose the game by 0.5 point.

This eternal life is technically much more interesting because:

Because this was a league game, both players were awarded half a point towards their league scores, a rather happy ending. In other situations, a replay might be ordered.

The third example is a game between Uchida Shuhei 3-dan and O Meien 9-dan. While the previous eternal life example happened in yose stage, this one was during mid-game. And it was once again an eternal ko! 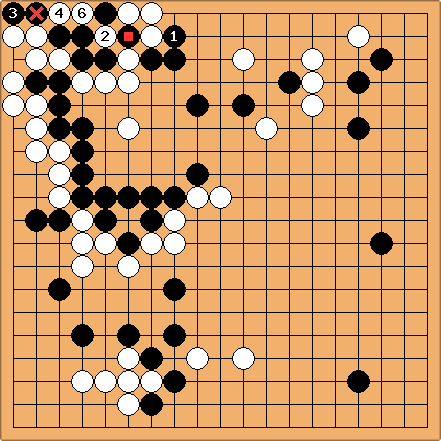 The players had been fighting a messy approach ko at upper-left corner. Black just created a directly ko at *b1*.

is black's local threat. In response,

is white's local threat. Because this ko is so valuable and neither of them could afford to lose it, they had to settle in an enternal ko.

I think you are talking about the game in Example 1. After white T14, black cannot just capture one stone. Otherwise white would play T17 to form a bulky five big-eye dead shape.

This is a blog article covering one of the game I discussed: